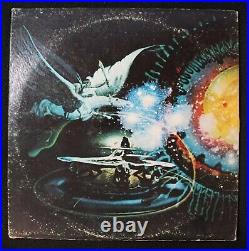 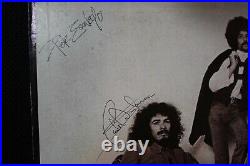 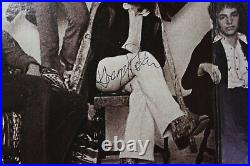 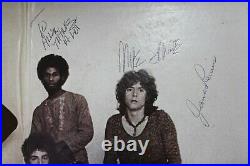 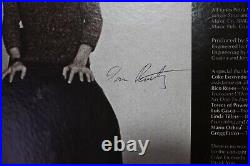 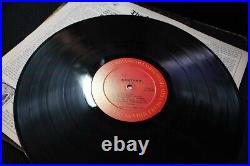 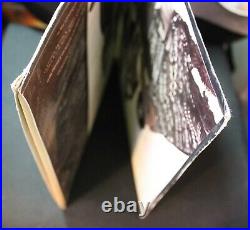 Here’s the provenance and what I know so far : I picked up this album in a much larger box of albums 10-15 years ago, when I was just bringing home boxes of records without really looking at them. They were donated to a library in upstate NY, and because the library just tossed them all in the trash, I usually loaded them into my car instead. I’m planning a move so I’ve finally decided to start sorting through these. I found a few signed albums in that batch, which makes me think that this was, at one point, a person who attended a lot of shows, was a serious collector, or somehow worked events or recording with bands. Another one was signed by the singer from De Dannan, which is a weird one for sure. I can’t find any examples of this album signed like this. Signatures are Carlos Santana, Pete “Coke” Escovedo, Gregg Rolie, Mike Shrieve, Tom Rutley, and James Lewis. It’s also signed “To Allen, Thanks A Lot”, probably by Shrieve, given the proximity to his autograph. I’ve reached out to him for comment, but have not yet received an answer. I’m assuming James Lewis is James “Mingo” Lewis, who was a session musician with Santana in’72/’73. He’s not credited on the album so it’s a weird choice to include him here. No searches I can figure out are coming up with who Allen or Ian/Tom might be. Signed with 2 different ballpoint pens; one is thicker, one is thinner. Sleeve is in not great condition, see pics. Weird inclusion of personnel not even on the album. I feel confident that this is authentic (but I can offer no guarantees), as it wouldn’t make much sense for someone to fake a signature and also personalize it, and include a session musician in the signatures. But it is unusual to find something with so many autographs! 1/25/22 Addition : I’ve been informed by a very kind Santana expert that this was signed by the. East Coast touring band, and that the unknown sig is Tom Rutley. As far as condition goes, the record and cover are worn. Check out the pics! I have no tested the record, but it’s not really the important part of this. This item is in the category “Music\Vinyl Records”. The seller is “resonantfish” and is located in this country: US. This item can be shipped worldwide.